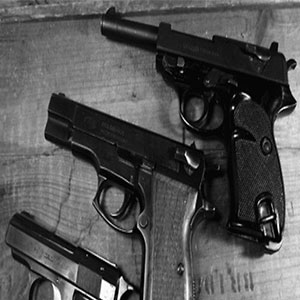 While you may think the Second Amendment protects your rights regarding guns, there are still restrictions concerning possessing and owning a firearm under Massachusetts state law. Anyone charged with one of the many weapon violations here can expect aggressive state prosecution and stiff punishment if convicted. Because of this, it’s essential to retain an experienced criminal defense lawyer knowledgeable in the complex criminal weapon charges in the state.

Attorney Darren T. Griffis understands the complex state laws surrounding weapons use and ownership, including guns, knives, and more. He is also experienced in designing defense strategies to provide you with the best chance of beating your weapons charge.

Illegal carrying of firearms: In Massachusetts, to possess or carry a loaded or unloaded firearm, you must get a license. You can choose from a Firearms Identification Card or a License to Carry. Without one of these, you can be arrested immediately if spotted carrying a weapon. The mandatory minimum sentencing for this is 18 months in jail. Other weapons are banned, and if found carrying one, such as a sawed-off shotgun, you can receive a life sentence.

Illegal discharging of a weapon: It is illegal to discharge any firearm within 500 feet of a building unless you have the owner’s permission to do so.

Improper storage of a firearm: You must store a firearm in a locked safe or container or with an appropriate gun lock when not carrying or in control of it.

Possession of a firearm in commission of felony: If during the commission of a felony, you possessed a firearm, additional criminal charges apply with a sentence added to whatever received for the underlying felony.

With stiff minimum sentences, including for first-time offenders, your defense strategy needs to be the best. For this, you need a confident weapons defense attorney to review and analyze your case’s facts and build a strong defense.

Darren T. Griffis diligently reviews your case and determines the best course of action for your circumstances by choosing from one of the many defense strategies available in Massachusetts. Examples of potential defenses include:

Lack of possession: Presenting arguments that you were not in possession of the firearm and had no control over it.

Illegal search and seizure: If the firearm or weapon is seized in an unlawful search, your attorney may file motions to suppress evidence based on a violation of your constitutional rights.

If you or someone you know is brought up on a weapons or firearm charge in Massachusetts, contact criminal defense attorney Darren T. Griffis for legal advice and representation. Highly experienced in all Massachusetts criminal law areas, you can expect to receive the defense strategy you need. Call our law firm today at (508)475-5871 to schedule a consultation.