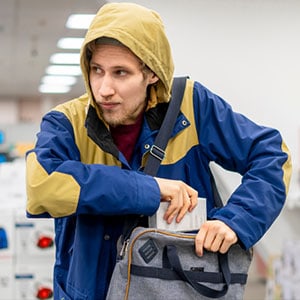 When you are accused of shoplifting in Worcester by the big box stores like Kohl’s, T.J. Maxx & HomeGoods, Walmart, The Home Depot, Price Rite, Shaw’s, or Price Chopper, it’s likely there is going to be significant evidence against you, potentially including video surveillance or eye witness testimony.

A shoplifting charge is a serious crime with harsh penalties. It’s common to think of shoplifting as a minor crime and for defendants to consider pleading guilty rather quickly to avoid the embarrassment of the experience. But since many shoplifting cases are going to involve big chain stores with entire departments dedicated to catching shoplifters, they are going to push for a conviction rather than let you off with a slap on the wrist.

Whether you forgot to pay or had a momentary lapse of judgment, we understand that we all make mistakes. That’s why our skilled Worcester shoplifting defense attorneys are ready to help you avoid criminal penalties or have your shoplifting case dismissed on certain occasions.

Where Do We Serve?

At the Law Offices of Darren T. Griffis, we offer aggressive criminal defense for people facing shoplifting and larceny charges in Worcester and throughout Massachusetts. Our law firm will dive deep to ensure all your constitutional rights are protected. And should the matter end in court, our experienced and persuasive trial attorney will confidently argue in your favor. Call us right away to start preparing a defense strategy.

Shoplifting is defined in Massachusetts General Law. c. 266 s. 30A. This law provides that anyone who intentionally takes possession of merchandise without paying for it, conceals it, moves it into different containers, alters or switches its label, or takes away a shopping cart, shall be punishable under this section.

All these charges could have serious consequences if convicted, including a criminal record hanging over your head and, if you are not a U.S. citizen, potential immigration issues. Don’t risk going through this process by yourself! Contact a Worcester shoplifting defense lawyer immediately.

What Is the Punishment for Shoplifting in Massachusetts?

If the goods’ worth equals or exceeds $250, the penalties are as follows:

It is a common misconception that a shoplifter is going to pay for the item and pay a small fine or have the case dismissed because he or she is a first-time offender. Unfortunately, this isn’t always the case. Shoplifting is pursued aggressively because of the losses it causes to businesses.

When facing a shoplifting charge in Worcester, MA, which has the potential to affect your employment opportunities and leave a strike on your criminal record, it’s important to call an attorney as soon as possible.

Don’t gamble with your future. Call The Law Offices of Darren T. Griffis today for a free legal assessment.

Do I Really Need a Criminal Defense Attorney for a Misdemeanor Shoplifting Charge?

There’s no question that you want an attorney to advise you, even if you’ve only been charged with a misdemeanor shoplifting offense. Shoplifting can include many different allegations. A retailer may claim that you carried, hid, concealed or otherwise manipulated merchandise with the intent of stealing it or paying less for it…Read More